We were planning a visit to Paris and were to leave DFW on November 14. The “setback” in the war with Islamic terrorism that occurred there made postponing our trip for a month prudent. Being blown up was as not that much of a consideration—Dallas can be pretty dangerous, though most of the hazards to life and limb here come from nitwit drivers. The monumental hassles attendant to the immediate aftermath of the Paris terror attacks, however, would have made the trip less enjoyable.

One consolation was a visit to Fort Worth’s Kimball Art Museum this past week. The museum is featuring an exhibition of Gustave Caillebotte’s works through mid- January 2016. Caillebotte, an impressionist, though somewhat more realistic than the others of the school, produced nearly all of his works in the two decades following the Franco-Prussian War and the fall of Napoleon III. He may be is best known for his paintings of urban Paris, such as The Europe Bridge (1876), and Paris Street; Rainy Day (1877). The latter is huge—more than life-size.

A number of his works were scenes observed from windows in upstairs Paris apartments such as Young Man at His Window. 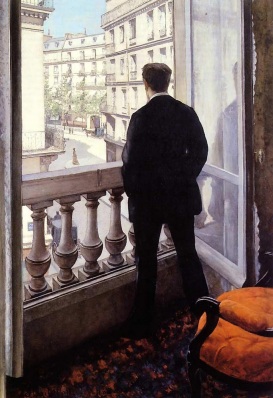 The Paris Caillebotte painted, and indeed to a large extent, the central city we know today, was a creation of a massive project that began in the 1850s under the direction of Baron Haussmann. Prior to that time Paris was mostly a medieval rabbit-warren of dilapidated building and narrow streets—terribly polluted by the exhaust from horses and other draft animals. Haussmann was commissioned by the Emperor Napoleon III renovate the city and eliminate the blight and squalor that characterized it. Napoleon’s stated reasons were aesthetics. It has been charged, however, that the Emperor’s objective for creating wide boulevards was to make it easier for his army to maneuver and suppress armed uprisings; Paris had experienced six such uprisings between 1830 and 1848, all in the narrow, crowded streets in the center and east of Paris. Whether that purpose was preconceived or not, the boulevards played a substantial role in the army’s suppression of the Paris Commune, which some have characterized as earlier day terrorists, in 1871.

The project was pursued with a vengeance that would make a modern day Dallas developer jealous. Whole blocks of housing and commercial buildings were demolished to make way for the wide, tree-lined boulevards so familiar today. Many pubic buildings were planned and built, as well as the famous bridges crossing the Seine. The huge parks Bois de Boulogne on the west and Bois de Vincennes on the east were built during the 1860s. Though briefly interrupted by the Prussian siege of Paris and the Commune in 1870 – 1871, the renovation continued after Haussmann was dismissed and Napoleon’s Second Empire collapsed the same year. It wasn’t until the 1920s that the original vision was completed. The street scenes Caillebotte painted are recognizable today.

The Caillebotte exhibition is well worth the price of admission.

2 comments on “Paris in Fort Worth”