This October 14th is the 945th anniversary of the Battle of Hastings, decisive for the Norman Conquest of England in the year 1066. It is one of those pivotal events in history whose effects remain with us despite the passage of almost a millennium. That day, the Duke of Normandy, known at the time as William the Bastard because of his illegitimate birth, and his army defeated an Anglo-Saxon force and killed the English King Harold at Senlac Hill in southern England. The Duke then became William the Conqueror, and set in motion events that changed the world.

Although in 1066 there was no English language as we know it today, the Anglo-Saxon Old English that was spoken then formed the basis of what has become the lingua franca of the entire world today. It would not have developed as such without the Norman French that the Conqueror and his barons brought with them. For nearly three centuries, England was bi-lingual. The nobility and the gentry spoke Norman French while the lower classes – the conquered – spoke Old English. Gradually the two languages merged, first into Middle English, the language of Chaucer and Langland, and then into the modern language much as we know it. The familiar doublets such as “aid and abet,” “peace and quiet,” and “over and above” are vestiges of the dual languages in Medieval England.

The real property law in Great Britain, the United States, Canada, Australia, New Zealand, and to a lesser extent, many African nations formerly British colonies, had its genesis in William’s feudal tenures. Shortly after consolidating power, the new King commissioned the Domesday Book, a catalogue of all English land and its owners, so he could efficiently tax his subjects. He distributed land to his barons to remunerate them for military service and ensure their loyalty. This system evolved into the property ownership system we have today.

Prior to the Conquest, England was oriented to Scandinavia, not to continental Europe. Indeed, there were several Danish kings of England, and one of William’s rivals for the English throne, Harald Hardråda from Norway, beat him to England, but was defeated near York by the Anglo-Saxons just three weeks before Hastings. As a result of William’s victory England permanently became oriented to France and the rest of Western Europe. English Kings up until almost the 16th Century also claimed to be the kings of France, and actually controlled large parts of that country. This orientation, together with the sea that served the realm “as a moat defensive to a house against the envy of less happier lands” ultimately enabled England to become a maritime power, and become the center of the global British Empire. That empire, now bygone politically, spread the language, culture, and people of Britain throughout the world.

The present Queen Elizabeth and her children and grandchildren who will presumably sit on the throne some day, can trace their ancestry to William the Conqueror. The family tree detours through Germany and Scotland, and at one point has several branches that split and re-merge, but

the line is unbroken through 30 generations (or 31, depending on which line one follows through the Lancaster-York era in the 15th Century). Prince William, who married this year, conceivably could be King William V in the millennial year of the Conquest, 55 years from today.

For anyone interested, nearly every survey of British history has an account of the Norman Conquest. Peter Rex, 1066: a New History of the Norman Conquest (2009) is a detailed but Readable history recently published. Several ancient copies of the Domesday Book are in the British National Archives in Kew, and reproductions are available. The Bayeux Tapestry, a graphic depiction of the battle and the event leading up to it created shortly after the Conquest, has been reproduced many times. See below 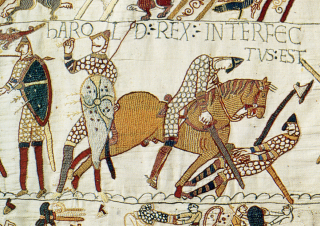