Bill the Bard famously included a humorous interlude in the midst of his tragedies as a method to relieve the built up tension.  The gravedigger scene in Hamlet or the porter scene in Macbeth are some examples. Many contemporary dramatic films and plays contain similar scenes, as does real life.  Residing in a vintage house in an old neighborhood occasionally presents one, as here.

Last evening while Martha retired a bit early, I went into the next room to read for a bit.  At some point, I dozed off only to be awakened around 1:00 a.m. by what sounded to a minor cat altercation. Since our two felines occasionally have issues with one another, I thought nothing of it and pick up my Nook to finish reading a chapter.  A minute or two later, I looked up to see Martha standing over me.  “There’s a raccoon under the bed,” she reported in a calm, measured voice, “and I’m not sure how to proceed.”  (This is a woman who thinks nothing of picking up a snake from the middle of a road so it won’t get run over, in case you’re wondering.)  I replied with something like “I’m not sure either,” but, curious wen into the bedroom and saw this: 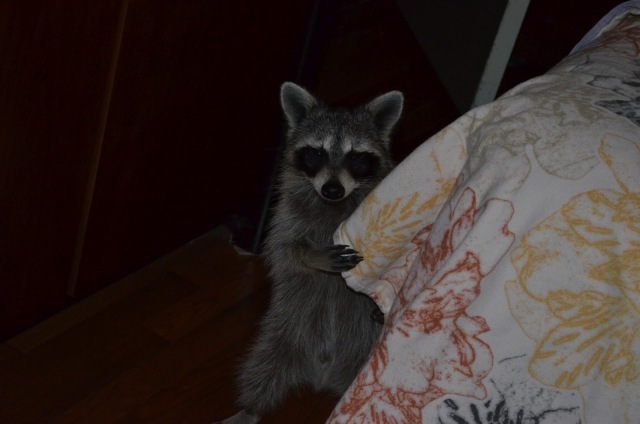 Rocky
(or I was a teenage raccoon)
Sure enough, the Masked Marvel was there, and showed no inclination to leave.  Fortunately, our bedroom has an outside door to a side porch, so we decided to open it, and lay down a trail of cat food leading out to the porch.  As Rocky was a bit shy we excluded the cats from the room while we waited for the critter to take the bait.  Naturally, the felines were fairly frantic outside the door to the interior hallway.  Nevertheless, the critter’s hunger took hold and he/she followed the trail of food, until outside. Whereupon, I closed the door. 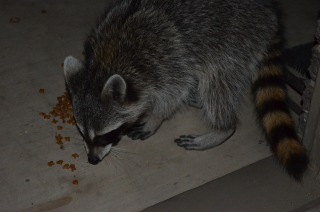 Raccoon Treats
This was not our first visit by this guy’s relatives.  And we famously had a ‘possum that didn’t play a few years ago.  That one’s aroma (dead for several days, yikes!) almost ran us out of the house.  But our raccoon left without further incident.  All is well.