“As to his ethnicity or national origin, a politician cannot usually deceive his public. If he is a Ruritanian he has to admit it and bray loudly that he is inordinately proud of it, thus securing the votes at least of nitwit Ruritanians.”   — Ferdinand Lundberg, The Rich and the Super Rich

The U. S. Census Bureau has announced that after more than a century, it will no longer use of the word “Negro” to describe black Americans in surveys. See the Associated Press story here.

I’m OK with that.

The form will continue to give the option of one describing oneself as “black” or “African-American.”

More about the term “black” at the end of this essay. I have a beef with “African-American” as a racial or ethnic term. Africa is a huge continent, and people from Ghana are as different from Xhosa in South Africa as Scots are from Greeks. What about Egyptians, Algerians, and Berbers from along the Mediterranean, who in less anxious times would be classified as Caucasian? Even more to the point, what about Afrikaners? Many of those people have ancestors who lived in South Africa for 15 generations? I once had a student who came from Nigeria who objected to being called a Nigerian; she told me if I had to refer to her ethnicity, call her an Ibo, but preferred plain American because she went to a lot of trouble to become a citizen.

Mercifully, the Census does not use the appellation, “native-American” but defers to the technically incorrect but long accepted term “American Indian.” I find the native-American term especially loathsome. Not only is it also technically incorrect – “native” refers to where one was born – but it implies that those whose ancestors immigrated to this hemisphere pre-Columbus have a better right to be here than subsequent immigrants. If one really wants to technically, if not politically, correct in describing humans based on where their ancestors ultimately came, we are all African-Americans, as anthropologists have determined that our species originated in the Great Rift Valley of eastern Africa.

But why don’t we get rid of racial and ethnic classifications in the Census, as well as all other official forms and reports altogether? Forcing people into identity pigeonholes based on their ancestry, physical characteristics, and/or language that their parents or more distant ancestors spoke perpetuates division and neo-tribalism. I suppose that makes for political advantage for some, but it does the country no good whatsoever.

This history of why the Census includes racial classifications to begin with goes back to the three-fifths compromise in the Constitution as it was before later Amendments. The census was necessary to determine how many representatives a state would have in Congress. The states where slavery was prevalent wanted to count their slaves; those states where there were few slaves (at the time all states permitted or tolerated slavery to some degree, but only the south had a significant number) believed slaves should be not be counted. The compromise was that only three-fifths of the total slave population would be counted for apportionment purposes. Since slave status was synonymous with being black or “colored,” the Census differentiated them using race. Now, there were some free blacks who actually owned other blacks as slaves. I am not sure how those were dealt with; there were very few and almost all in Maryland. Perhaps they became honorary whites, I just don’t know. But that is a “so what” question today.

After the Civil War and the abolition of slavery, the classification was based on the principle of hypodescent – sometimes called the “one-drop rule” to enforce the Jim Crow laws. That principle itself is insulting, both to parents and children. It is based on the premise that a parent whose biological or social classification is of “lower” status contaminates the genome (less scientifically known as “blood”) of the other parent. Its continued use, especially officially, perpetuates the notion that some “races” superior or inferior, and that any discernible ancestry of an alleged inferior racial group in a person relegates him or her to a lower status. This results in the situation where one who had but one great-great-great-grandparent who immigrated to this hemisphere in pre-Columbian times or was of sub-Saharan African origin can claim certain benefits, other citizens cannot. I mention these two as situation not to emphasize them, but only as obvious, non-exhaustive examples. The Census form is so persnickety that it actually differentiates between type of Pacific Islanders, the purpose of which totally escapes me. There is a classification of “other” which I have used in the past three censuses where I’ve put down “human.” Never have been challenged on that. I was once tempted to enter “Vulcan” on behalf of my extremely logical thinking spouse, but resisted.

The Census used the “white” and “colored” classifications throughout the 19th Century. “Negro” became in use in the early 20th. Later, when politicians came to realize they could classify folks to form voting blocs based upon race or ethnicity to pander to grievances, the more numerous the groups became.

I will acknowledge that those who were subjected to legal disabilities or racial segregation had a beef. It doubtless was necessary in another time to take black Americans race into account in order to fashion remedies for the effects of legal segregation and legal invidious discrimination. It has been 45 years since the law anywhere in the United States required or encouraged segregation and racial discrimination. It is true that private racism still exists, but it always will among stupid and small-minded people. Human beings use their sense of sight as their primary means to obtain information. Visual aesthetics generally trump those of other senses. Why else would there be beauty contests? Individuals have a right to whom they decide associate with and on what basis they do so. So long as the government does not discriminate on the basis or race, color, or national origin, and individuals do not so under color of law or government authority, the right of association should not be infringed. One exception that I would concede, is that state and federal (in the case of interstate) governments have a legitimate interest in removing barriers that inhibit commerce. Public accommodations and employers of a certain size that practice racial exclusion or discrimination can have a deleterious effect on commerce, and may be proscribed from doing so, though some of the methods used to root out those practices focus on non-existent group “rights” rather than individuals. Social engineering on the part of government is wrong, not the least because it does not work and can be counterproductive.

As far as the term “black” is concerned, I find it anomalous that it is possible that there are those who have complexion lighter than many people who are considered “white” classify themselves thus. I do recognize that it has more to do with mere skin color. It reminds me of one of the earliest anti-racism pieces of fiction “Desiree’s Baby” by Kate Chopin, which should be required reading in school for everyone. If racial classifications are to be used, however, I have no particular beef with black. If our government insists on using bilingual Census forms, however, “negro” will have to remain. It is the Spanish word for black. 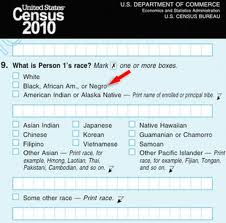