Cry ‘Havoc,’ and let slip the dogs of war;
That this foul deed shall smell above the earth
With carrion men, groaning for burial.
– Julius Caesar, Act III, Scene 1 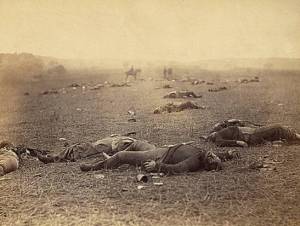 This coming week, which includes the Fourth of July, I would normally be inclined to write something about the Declaration of Independence or some other topic related to that momentous event of 237 years ago. I, indeed, have done so in this space. This year, however, that anniversary is in close proximity to the sesquicentennial of the Battle of Gettysburg in the American Civil War (or, if you please, the War Between the States, War for Southern Independence, etc.). So I will write about Gettysburg.

Anniversaries, particularly those divided by 50, bring forth a lot of writing, dramatization, and speaking about the commemorated event. Apart from the American Revolution and World War II, there is no other contender for the most significant event in our history, thus, the current avalanche of expression.

Books I previously mentioned in this space (or elsewhere) concerned the causes of the War, both remote, proximate, and immediate. York (Ontario) University professor Mark Egnal’s Clash of Extremes performs a detailed and painstaking analysis of the events leading up to the conflict to support his thesis for why we had a Civil War. It was all about money, or, more accurately, wealth, and how it is produced. The War was an epic struggle between the ancient feudal agrarian economic system, and the burgeoning free market capitalism made possible by the scientific-technological-industrial revolution. I would add that revolution flowed from the ideas of the 17th and 18th Century Enlightenment. The South was dependent on slavery as a labor source, and also, as many thought at the time, as a means for social control of a Toynbean proletariat (a group that is in a society but not of it).

A recent book by Thomas Fleming about the causes, A Disease of the Public Mind: Why We Fought the Civil War, propounds the thesis that the cultural differences between the Northern and Southern colonies, and later states, caused suspicion, distrust, and dislike from the very beginning of the colonial period. (I have yet to read Fleming’s book, but listened to an interview of the author on the KERA 90.1 radio program Think. See KERA.) The inevitable consequence was separation, or an attempt at it. Perhaps Fleming regards the Constitution a Procrustean instrument to forge a tenuous union. I may report on his work in the future.

Nelson Lankford’s Cry Havoc: The Crooked Road to Civil War tracks the events that led to the actual outbreak of war. Like World War I, which was to occur a half-century later, hostilities commenced because the politicians on both sides, blind, willfully or not, to the likely consequences and therefore recalcitrant, lost control of the situation.

A third book is more for the buff. Russell S. Bonds’ Stealing the General: The Great Locomotive Chase and the Medal of Honor, recounted the April 1862 Andrews Raid in Georgia. That attempt to disrupt the railroad supply lines to enable an early thrust into the heart of the South failed, but the failure was accompanied by heroism on both sides.

This weekend, in an essay in the Dallas Morning News op-ed section (see DMN Horowitz), Tony Horowitz asks whether the War was necessary or inevitable and presents a number of views by historians.

Historians have “decided the Civil War is a ‘good war’ because it destroyed slavery . . . it’s an indictment of 19th-century Americans that they had to slaughter each other to do that,” Horowitz quotes University of North Carolina professor Fitzhugh Brundage.

But David Goldfield believes that the War was America’s greatest failure. War could never have truly delivered the slaves from bondage or re-unite the nation. The subsequent 100 years bear him out. According to Horowitz, Goldfield’s conclusion is that given the equivocal gains – forcible and uncompensated emancipation and forcible political re-union – the War was not worth the immense toll in blood and treasure.

The blood was, by revised estimates, that of 750,000 dead Americans; as of this writing more than all of the other wars the United States has engaged in put together. (Earlier estimates were around 618,000, which would have been exceeded during the Vietnam War.) The treasure was over $10 billion in 1860 dollars, enough to buy the freedom of every slave and purchase land for them (probably more than the storied 40 acres of abandoned marsh land General Sherman’s Field Order No. 15 provided for, given the vast public lands in the west). The British Empire had accomplished compensated emancipation in the 1830s, and Brazil was to later in the 1880s. Why could not the United States have opted for the same solution? I suspect that Fleming may have his opinion about that.

Gary Gallagher of the University of Virginia opines that there is an Appomattox Syndrome that causes us to look at the Union victory and emancipation and read the historical evidence backward. Very few Northerners went to war seeking the destruction of slavery, Gallegher says; very few Southerners went to war to defend it.

Does that mean that slavery was not a cause, or even the main cause of the War? Of course not. The economics of slavery was the sine qua non for secession and war. But there had to be a rallying cry. At first, for the North, it was “save the union.” For the South, it was “repel the invader.” When preservation of the Union became too abstract for a man who had a wife and children at home, freeing the slaves took its place. For the South, Lincoln’s Emancipation Proclamation, which was a strategic military ploy, which only had effect in places held by the Confederacy, raised the specter of millions of freed slaves that would be a danger to the fighting man’s home and hearth. That Proclamation, probably not by design, resurrected John Brown’s spirit, if not his body.

Probably the historian who lives geographically closest to the Battle is Allen Guelzo, professor and director of Civil War studies at the eponymous Gettysburg College. In his most recent book, Gettysburg: The Last Invasion, as well as others, Guelzo indulges in the “what ifs” the battle had turned out differently. He believes that if Lee’s army could have broken the Union line on July 3rd, it would have been all over. Perhaps, but who really knows.

What I believe the salient lesson of the Battle of Gettysburg, was not that Robert E. Lee, normally the most brilliant of tacticians, and one of the most honorable figures to come out of that profoundly saddest of American episodes, had a bad day at the wrong time, but that he never should have been there in the first place. For the seven years prior to the fourscore Lincoln alluded to, Lee’s kinsman by marriage, George Washington, realized that he did not need to win the war; he just needed to not lose it. The South’s war-making capacity in materiel and infrastructure was vastly inferior to the North. An invasion, if successful, might have broken the Union army’s morale, but it is nearly impossible to see how it could have. Lee simply asked too much of his men. Washington simply outlasted the British. Arguably, lee lost his War at Gettysburg, not by a tactical defeat, but by a strategic one.

Part of this might have been a manifestation of the adage that generals always tend to fight the last war. Lee was a veteran of the Mexican-American War, where the U.S. Army’s artillery blasted the Mexicans to bits at Monterrey, Buena Vista, and Chapultepec. He appears to have felt he could do the same to the Union army with his prolonged cannonade prior to Pickett’s charge. It was not enough.

Nevertheless, after his great successes at Fredericksburg and Chancellorsville. Lee should have hunkered down in Virginia and let the Union forces come to him. Whether they would have is more speculation, but Lee would have been on his own ground and could have defended the way he did a year later, but with an intact army. Furthermore, later in 1863, General Longstreet’s corps, though weakened at Gettysburg, was sent to Georgia to assist in the Battle of Chickamauga. The Confederates won that battle but failed to relieve Chattanooga. If Longstreet’s force had been up to strength, they might have completed the victory.

Lost in the drama of Gettysburg was an equally significant event on July 4, 1863. While Lee began the withdrawal of his seriously weakened army from Pennsylvania, General Ulysses S. Grant was accepting the surrender of the Confederate redoubt at Vicksburg. This victory gave the Union forces control of the Mississippi River. While a serious blow to the South, it did not, as some historians put it, cut the Confederacy in two. The river did not become the Great Wall of China. If, however, Mark Egnal is right about the Great Lakes economy and its impact on sectional relations, control of the river in itself would have accomplished a major goal of the War from the perspective of Midwesterners. If Gettysburg had not happened, it’s possible that a negotiated peace would have been attractive to both Lincoln and Jefferson Davis.

But the Dogs of War still slipped.

One comment on “The Dogs of War Still Slipped”