I wrote the following essay several years ago. Today, June 6, I believe it is worth posting again.

The pleasant town of Bayeux in northern France is famous for its eponymous tapestry depicting the events leading to the Norman Conquest of England in 1066. Across from the railway station there is a pub which serves cold beer and the apple cider the region is also famous for. That establishment bears a sign “Welcome to our liberators.” The sign would appear to be incongruous, except that about ten kilometers to the northwest is a bluff overlooking a sandy expanse along the English Channel that for the past nearly seven decades has been known to the world as Omaha Beach.
Many words have been written and spoken on the anniversaries of D-Day and of the Veterans Days since. It was the beginning of what General Eisenhower called the “Great Crusade” to end the Nazi occupation of Europe, and ultimately win World War II. Today, the word “crusade” is politically incorrect in some circles as being offensive those who have vowed to kill us and actually have achieved some success in doing so. And we have become accustomed to euphemisms, direct and to the point speech being too harsh for our sensitive ears. That is just as well. The loudest, and most eloquent, statements to be made come from the 10,000 American graves – more than those which have resulted from 10 years in Afghanistan and Iraq – at the top of the cliff and the sound of the waves below.
During a visit to the beach even this long after the fact, it was not difficult to picture the horror and chaos experienced by the soldiers and sailors who stormed ashore that day. The Germans had fortified nearly the entire coastline of France, as well as the coasts of other occupied countries. Various barriers and obstacles had been placed in the water offshore to prevent landing craft from reaching dry land, and to channel invaders into killing zones covered by machine gun bunkers dug into the 100 feet high cliffs above. This required the assault to be made at low tide, leaving a 300 yard completely open expanse of sand to traverse before the slightest natural cover could be reached. Above the high tide line is another 50 yard stretch of loose sand. Walking unencumbered on loose sand can be difficult; running with 60 pounds of weaponry and equipment, all the while facing withering small arms and artillery fire, has to have been a nearly superhuman feat. Many of the invaders did not make it; that so many did is a credit to the quality of the military training and preparation, as well as the fortitude and power of the survival instinct of the troops. The actual film footage in the Normandy episode of the Victory at Sea documentary demonstrated some of the difficulty, but the bloodiest parts had to have been edited to make it suitable for a 1950s home audience. The fictional first 24 minutes of the film Saving Private Ryan might more accurately portray the horror and difficulty of the assault, but still may be an understatement.
It could have been worse. A major part of the plan was to deceive the Germans as to where and when the attack would be made. As previously mentioned, the entire coast-line was fortified. The defending German army was battle-hardened, and exceptionally well-led by Field Marshals Gerd von Runstedt and Erwin Rommel. Their main problem was manpower and munitions. Five years of war, and the continuing demands of the Russian front in the east made critical to the defenders the knowledge of the place and time of the landings. The deception, with some cooperation from the weather, worked. The German defenders were caught off guard at Normandy, and were unable to bring the full weight of their forces to bear until a beachhead was established. Even so, a two-month battle for Normandy followed that was even more costly than the initial landings. Ultimately, the invasion was successful, and Nazi Germany unconditionally surrendered eleven months and two days after D-Day.
The Normandy Invasion was the largest amphibious operation of World War II, and the most decisive success, but it was not the only one. The Allied landings in Italy and Sicily, and the mainly U.S. Marine Corps landings on the Pacific islands of Tarawa, Saipan, Peleliu, Iwo Jima, and Okinawa were proportionately as bloody, though none faced the same magnitude of prepared defenses that Normandy offered. It would have been different had an invasion of the Japanese homeland been necessary. An assault on Japan would have faced an even more determined and fanatical enemy. Planned operations code-named Downfall, Olympic, and Coronet planned for as many as 1.2 million U.S. and Allied casualties.
All that was avoided by the Japanese surrender after Hiroshima and Nagasaki. Use of the atomic bombs undoubtedly spared the American forces, not one, but possibly as many as a half-dozen similar invasions. Armchair moralists might fret about the morality of President Truman’s decision to employ the only nuclear devices ever used in war, but one only has to stand on Omaha Beach and reflect what happened there 72 years ago, to understand it was the right thing to do. 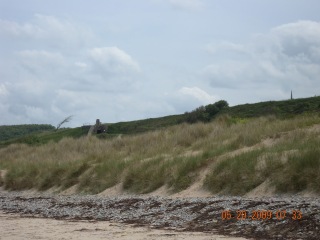