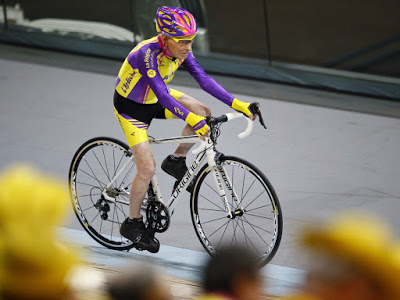 Frenchman Robert Marchand set a new world record Wednesday when he cycled 22.547 kilometers (about 14 miles) in an hour — at the age of 105.
Wearing a purple and yellow cycling suit, pink helmet and yellow glasses, Marchand completed 92 laps at the Velodrome National, an indoor track near Paris that’s used for elite cycling events.
According to The Associated Press, he set a new record for the 105-plus age group and received a standing ovation from people in the crowd, who chanted “Robert, Robert” as he rolled to a stop.
Still, he said he could have done better.
“I did not see the sign warning me I had 10 minutes left,” Marchand said, according to the AP. “Otherwise I would have gone faster, I would have posted a better time. I’m now waiting for a rival.”
For comparison, the U.K.’s Sir Bradley Wiggins rode 54.526 kilometers (about 34 miles) in 2015, at age 35, and holds the record for the men’s hour, the BBC reported.
“I am not here to be champion. I am here to prove that at 105 years old you can still ride a bike,” Marchand said, per Eurosport.
Hey. It’s not bragging if you can do it. — Dizzy Dean

Note:  Best I’ve done lately was around 16 miles in a hour on a hybrid bike on the White Rock Creek Trail (Mockingbird & Lawther — Hillcrest and Alpha round trip). Probably could go faster on a road bike in a velodrome.