Yesterday, we received a newsletter from the Dallas Independent School District. It contained an article about the 100th anniversary of Ben Milam Elementary School. A special guest was a 98 year old former student who attended in 1920, whose photo with cutline appear in the story. 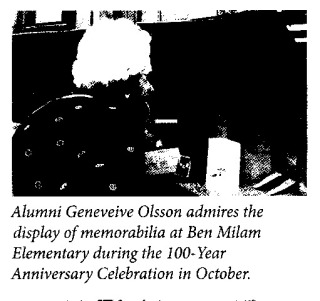 If the errors in gender and number are not readily apparent to you, then God bless. One might forgive the cutline writer, who may have acted in haste up against a deadline, but not the editor. Perhaps he/she is a product of one of the low achieving campuses. I feel sure that editor was not an alumnus of former pedagogue, and occasional commentator of these pages Gary B.

Or is my gripe pedantic nonsense up with which we should not put?