Fill a glass with water, and dip your finger into it. Except among our loved ones and close friends, the void that most of us would leave in this world is similar to that left in the water when the finger is withdrawn. For some, it might be akin to the space the finger would leave when withdrawn from   more viscous substances.  Then there is the rare person who, for a time anyway, is indispensable. The day World War II ended in Europe, May 8, 1945 confirmed such a man.
Here is C. L. Sulzberger’s tribute to him (excerpted from The American Heritage History of World War II, p. 97):
Remember him, for he saved all of you: pudgy and not very large but somehow massive and indomitable; baby-faced, with snub nose, square chin, rheumy eyes on occasion given to tears; a thwarted actor’s taste for clothes that would have looked ridiculous on a less splendid man. He wore the quaintest hats of anyone: tinted square bowlers; great flat sombreros squashed down on his head, naval officer’s caps rendered just slightly comic by the huge cigar protruding beneath the peak. On grave and critical occasions he sported highly practical Teddy-bear suits few grown man would dare to wear in public. He fancied oil painting, at which he was good, writing, at which he was excellent, and oratory, at which he was magnificent. His habits were somewhat owlish (a bird he faintly resembled), and he stayed up late at night, often working mornings in bed with a lap tray for his desk.
This was the man, blooded at Omdurman and Cuba, among the Pathans and the Boers, long before most of those he led were even born, who guided Britain to victory in World War II – and, one might add, who was the guiding spirit for the whole free world. For had Britain succumbed, as it had every logical reason to do in 1940, probably no successful coalition could have been formed. 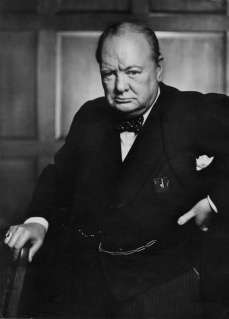 Winston Churchill
“Never in the field of human conflict was so much owed by so many to so few”
Or to one.
I recently watched the films The Gathering Storm, with Albert Finney and Vanessa Redgrave, and its sequel Into the Storm, with different actors.  They are respectable accounts of Churchill’s career in the decade prior to and during the War, and well worth the the $4 (each) to rent.