Those who have paid attention know the story. Longtime U.S. Senator Ted Kennedy died on August 25, 2009. The governor called a special election for January 19, 2010 for a replacement to serve until the expiration of Kennedy’s term. Against expectations, Republican candidate Scott Brown, who campaigned as a fiscal conservative and opposed to the proposed legislation that has become to be known as Obamacare, defeated Democrat Martha Coakley. Now Senator Brown is seeking re-election to a full term. His Democratic opponent will probably be Harvard Law school professor Elizabeth Warren, supposedly a consumer affairs expert and darling of the left-wing.
On April 27, 2012, the Boston Herald reported that Warren had listed her ethnicity as Native American and Harvard’s law school had been touting that in a effort to answer a charge that its faculty was “too male” and “too white.”   (See Boston Herald)
On April 30, 2012, the Boston Globe reported that Warren had listed her ethnicity as an Native American in Harvard’s faculty directory and the American Association of Law Schools desk book. “In a 1996 article, the Harvard Crimson quoted a Harvard Law School spokesman saying that the faculty of 71 included one Native American – Warren – in addition to a few black and Hispanic professors and 11 women. The claim was repeated in a later Crimson story that called Warren the first woman with a minority background to receive tenure.” (See Boston Globe)
It was later reported that Warren had one great great great grandpaent who was a member of a Cherokee tribe.
Warren’s candidacy is worthy of opposition for many reasons which are not subjects of the instant discussion.  I could not care less about who her biological ancestors happen to have been, and it does not appear that she personally sought any benefit from that self-identification. That is not the point. Well then what is?
Well, she is indeed a native American – she was born in Oklahoma, which, I believe is a State in the United States of America. Of course, what was intended by the ethnic classification was that she was American Indian, or the more concise term Amerindian. One-thirty second? Really?
At the outset I have to say that of all the ethic classifications dreamed up by bureaucrats who have nothing better to do, “Native American” in reference to those persons who have some traceable ancestry to a pre-Columbian indigenous person is the most offensive. “Native” comes from the Latin root that means to be born, ans is commonly understood to means one who was born in a particular place. “American” means a citizen of the United States of America. The Constitution provides that any person born or naturalized in the United States and subject to their jurisdiction is a citizen. If one is born here, he or she is a native American; if one immigrates and is approved after going through the process, one is a naturalized American. There is no difference in status, nor should there be.
“Native” does have a connotation in some instances of being more desirable, or having a superior right to be in the location. That is why to officially term a person who has one, several, or all biological ancestors indigenous to the Western Hemisphere, who by definition must be distant, a “native American” is vaguely insulting to those who do not but were nevertheless born here.
In another respect, ethnic or racial classifications are also rather insulting to those of us who do have such ancestors, as well as members of any group that is thus identified. The concept of hypo-descent is the manner in which persons of different ancestry are classified here in the U.S. This means that the children of a mixed race or mixed ethnicity are given the racial identity of the lower status parent.  This was extended to the “one drop rule” which defined a person with any discernible sub-Saharan African ancestry as “Negro” or “colored” or “black” for obviously invidious purposes. The rather tawdry origin of the concept to begin with is that the offspring of a dalliance between the lord’s sons (or the lord himself) and the scullery maid (or in the pre-Civil War U.S. master and slave) could not have the higher status without upsetting the social and economic order.  The compromise written into the original Constitution (mooted by the 14th Amendment) that counted three-fifths of the number of slaves for legislative apportionment purposes appears to have presumed that any black person was a slave unless shown to be otherwise and created the census classification for that purpose.    All of this suggests that classifying Ms. Warren, for example, as an Amerindian implies that her supposedly higher status “white blood” is tainted, a concept with which a Nazi would doubtless agree.

As for the continuation of racial classifications, that was necessary for the enforcement of Jim Crow segregation laws until they were declared unconstitutional. One would have thought that in America during the past half-century we could have moved beyond classification. Perhaps we could have, had not those who had good intentions, but were steeped in notions of collectivism, and deep down, real racism, managed to make national policy, together with those who saw ways to parlay race and ethnic baiting into a lucrative industry. The excuse most often made for continuing classification of people by race or ethnicity is that it is necessary to enforce equal protection laws. That is nonsense. If anything, it encourages discrimination via unofficial quotas, and the kind of perfidy some accuse Ms. Warren of for claiming to be an ethnic minority.
What is really disturbing about the left-wing (and some factions far to the right) of the political spectrum here in America is their continued insistence on identity politics. It is fundamentally wrong and insulting to individuals to ascribe qualities and attitudes to someone based on their ancestry, skin color, et cetera. It is the antithesis that all are created with the same unalienable rights, not some with special privileges. It is doubly insulting to assume that because one has certain physical characteristics characteristic to their biological ancestry, he or she is in need of help – that they can’t make it without that assistance. All families, clans, tribes, ethnic groups, and the human family have their share of saints and sinners, geniuses and ne’er-do wells.

Berkely Breathed, Outland﻿
Of all those who were historically forced into a disfavored minority status in Western Civilization, the European Jews of the Diaspora were probably the most ill treated over the longest period of time. They survived and, when many came to the United States where legal and economic barriers were removed, and social constraints were minor, they thrived. That was because they had developed a superior culture that valued learning and accomplishment. There is no inherent reason why members of every so-called ethnic group cannot do the same – and individuals born into all such groups have. In some instances it is necessary to repudiate their culture, but, since cultures are value systems, they are not entitled to equal respect. That is why this multi-cultural movement is such utter nonsense. That is not to say that we cannot learn from other cultures; cross-fertilization between and among different civilizations has value. The point is to be critical and judgmental about what one accepts and rejects. Some cultures are pathological.
In his dissent in the Plessy v. Ferguson case in 1996, Justice John Marshall Harlan observed that, in America, “There is no caste here. Our constitution is color-blind, and neither knows nor tolerates classes among citizens. In respect of civil rights, all citizens are equal before the law. The humblest is the peer of the most powerful. The law regards man as man, and takes no account of his surroundings or of his color when his civil rights as guarantied by the supreme law of the land are involved.” More recently Chief Justice John Roberts in Parents Involved in Community Schools v. Seattle School District No. 1 in a majority opinion, stated “[t]he way to stop discrimination on the basis of race is to stop discriminating on the basis of race.”
Both Chief Justice Roberts and Justice Harlan were correct. The failure of the court and the nation to recognize a color-blind Constitution in 1896 resulted in over a century of legal discrimination against black people in the country, and provided the mechanism for continuing that discrimination and adding new groups based upon their ancestry and supposed physical appearance. The civil rights laws of the 1960s and their progeny did not end racial/ethnic discrimination, they merely changed the manner in which such discrimination can be legal — mostly to benefit the political agenda of the left wing. Our government, through the Census and other ways, classifies its citizens into various racial groups on the assumption that everyone in each group has advantage/disadvantages, benefits/burdens, and interests, similar to every other member. This is racism – the basest and most vile species of collectivism pure and simple. The original reason for classifying persons in this manner was to facilitate the Constitution’s three-fifths compromise. As I previously stated, It should have been done away with after the 13th & 14th Amendments were passed. It should be done away with now, otherwise the fate of our state and nation will be Balkanization and the strife attendant to that.
The End Game 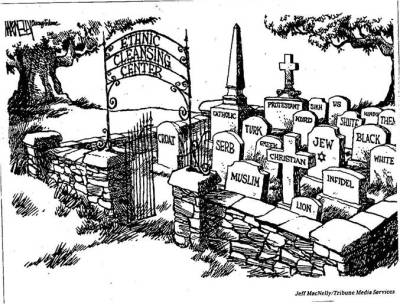