Just returned from a five day excursion to the Great Smoky Mountains and elsewhere. First on Southwest Airlines to Nashville Tennessee, and then to Bryson City, NC, a small town just outside the National Park. Returned to Nashville by way of Chattanooga, and then flew back to Love Field. All in all it was a pleasant extended weekend’s journey.
First Stop: The Parthenon
On previous occasions, I had only driven through Nashville without stopping on my way to somewhere else. This visit was prompted by a wish to see President Andrew Jackson’s home The Hermitage just east of the city, and the full scale replica of the Athenian Parthenon near Vanderbilt University.
Nashville has styled itself the “Athens of the South” because of its aspirations as an educational and cultural center. No doubt its Chamber of Commerce doesn’t discourage that appellation, and Vanderbilt and the Grand Old Opry certainly help it to live up to that ideal. The city fathers and mothers obviously had in mind ancient Athens, rather than the present day capital city of Greece, or even the namesake cities in Georgia or Texas.
A few weeks ago, some neighbors who had visited the Aegean and Adriatic seacoasts opined that the present day Greek capital is not worth a visit, except possible to marvel at the ruins on the Acropolis. So, since the Balkan countries are far down on our list of places to see anyway, and given the present turmoil in Greece, we figured that visiting a replica of the Parthenon might be the next best thing to seeing what is left of the ruins in Athens.
It turned out to be probably better. Nashville’s version is scrupulously faithful, as Classical scholarship can allow, to the aesthetics of the temple’s exterior and main halls of the interior. As an added feature, a recreation of the 42 foot tall statue of the ancient sculptor Pheidias’s Athena Parthenos, complete with gilded (actual gold leaf) dress and accouterments, is now standing in the Naos (analogous to sanctuary) of the temple as it was in ancient times. Impressive is an understatement.

The structure was originally conceived to be the centerpiece for Nashville’s Tennessee Centennial Exposition in 1897, and was designed to last for only a few years after the exposition. But, like the Eiffel Tower in Paris which was erected as a temporary feature for a similar exposition, the Parthenon caught on with the locals and tourists and became one of the city’s icons. It has been restored and refurbished several times during the past 115 years, the most recent being a comprehensive restoration begun in the 1980s and completed in 2002 with the gilding of Athena.
Between the interior walls and the colonnade defining the Naos are castings of the Elgin Marbles, remnants of sculptures of Greek gods and demigods that once graced the east and west pediments (the triangular spaces between the pitch of the roof and the entablature) of the Athenian Parthenon, now in the British Museum in London. These castings were used as guides to recreate the sculptures which are now on the restored Nashville Parthenon.
The lower part of the building contains an exhibit and artifacts of the Tennessee Centennial Exposition and a gallery for paintings in the James M. Cowan Collection of American Art. The ubiquitous museum shop is also located there.
The Athenian Parthenon is today a ruin atop the Acropolis. It is impressive for what is left of the evidence of architecture and engineering of the Golden Age of Greece in the Fifth Century B.C.  The structure’s dimensions make use of the golden proportion, said to be one of the most aesthetically pleasing shapes.   Two and a half millennia have not been kind to it, although it was said to be in fair shape until an explosion of gunpowder stored there pretty much destroyed it during a war between the Ottoman Empire and Venice in 1687. The original Athena Parthenos disappeared sometime during the 1st Millennium A.D. The sculptures that decorated the pediments were scattered over the Acropolis until the first decade of the Nineteenth Century when Lord Elgin removed them to Britain, ostensibly with the permission of and compensation to the Ottoman government. I have heard that there are some proposals to restore the Acropolis, but given the instability of the Greek economy, who knows when or if that will be accomplished.
Nashville’s Parthenon is faithful to the art and architecture of ancient Greece, but the engineering and construction methods are modern. The current structure may well last two thousand years from now. The world then will doubtless be as fantastic as our present would have been to Pericles, Socrates, and Aristotle. It will be quite a sight. 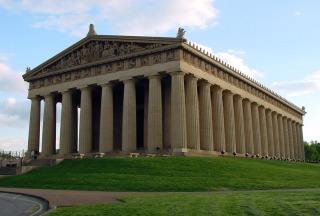 Next stop: The Hermitage.